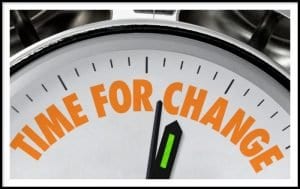 Jen Neitzel, owner of Maven Circle, and student of my “Wild Money Class” wrote this incredible, personal story of her wild money journey.  I wanted to share her story with my tribe because there are so many of you out there who relate to some, if not all, of Jen’s story.  I was deeply touched and SO proud of Jen for her honest and transparent experience with money.  I feel honored that Wild Money gave her the tools and resources to reignite her relationship with money.

I remember going to Luna’s presentation at Hello Etsy and feeling the tears well up in my eyes while doing the first exercise she offered: “Draw an image of your current relationship.”  Why the tears, I asked myself?

When I looked at my paper, through my tears, this is what I saw: 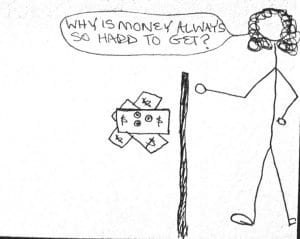 Here I was, an adult, a professional, and I was crying about a stick figure drawing about money. I was like, “Woah Nelly, bring it down a notch.” I ran to the bathroom and got hold of myself.

A few weeks after the event, I enrolled in Luna’s three month Wild Money Class.

There were about eight people in the class – seven women and one man.  Luna gave us chapters to read (chapters that would later become her book Wild Money) each week and then we would get together and discuss what we learned from the chapter or about ourselves with regard to the chapter.

One week, when I prepared to go to class I had a really profound experience with one of the exercises. In this exercise we were supposed to visualize that we each had our own money basket. It was the thing that you could catch, collect and save money in. We were supposed to draw what our money baskets looked like. Here’s my basket at the top of the page: 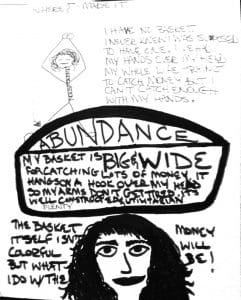 This is what that hard to read section says: “I have no basket. I never knew I was supposed to have one. I’ve had my hands over my head my whole life trying to catch money, but can’t catch enough with my hands.”

Down the side of my stick body it says, “deprivation.”

This was my past with money. I grew up in abject poverty. I never got new clothes, so I learned to sew. We didn’t own a car, but I was a great roller skater. We rarely went on vacations, but my imagination was big and wide and in technicolor for any type of adventure I might want to take. The three of us: my mom, sister and myself lived in a one-bedroom apartment for part of my life, with a bed in the living room. My bed, actually, was in the living room and there was no getting around how much this sucked.

It was in the Wild Money class with Luna that I realized that my old memories and thoughts about money, or the lack of it, were still affecting me today.

I remember drawing and writing the last part of this image, of my new basket (which represented my new relationship with money), with tears streaming down my face. While doing this exercise I told myself that I would make myself a proverbial money basket, big and wide. That it wouldn’t be a flashy basket. It would be a sturdy, useful, utilitarian basket, but what I’d do with the money would be flashy and colorful. I remember thinking that this basket will be so big and full of money that I won’t be able to hold it over my head for the rest of my life, so I think I’ll install a hook to hold the basket up for me, so my arms can finally rest. Imagining that I was putting a stupid hook up to hold my pretend money basket= crazy healing. I’m not kidding.

The exercise reminded me that I was an adult now and that I could use my common sense and skills to fix what was broken with my relationship with money.

This exercise reminded me that I’ve always seen myself as Mowgli from The Jungle Book. A feral child raised in the jungle by wild animals, which could be scary to some small humans, but not to Mowgli, who sings and dances and makes friends on his way through crazy, dangerous adventures.

And I realized that because I hadn’t really had much parenting, I had no idea what money was all about, how to save it or how to spend it wisely.

And, although I was a fully grown adult, I was still approaching money in an uneducated, childlike manner.

I realized that my attitude was that anything I received was good enough, and it was this thinking that was interfering with the me I wanted to be.

I realized that whatever I received wasn’t good enough and that I wanted more.

I want wealth. I never even let myself want wealth when I was young because it seemed too hard to achieve. A set-up for disappointment.

I used to wish for a lower middle class life. I thought that would be a huge step up for me as a young person.

As I came to these conclusions I realized that my script for money was outdated and I needed to draft a new one.

Jesus, this is sad to even admit that I used to think so little of my financial potential.

Of course I learned many practical tips and tools in this Wild Money class, but it was this one exercise that really blew the lid off of my whole concept about money, because I realized I had a relationship to heal and new skills to grow.

I realized I wanted more.

I realized I was capable of more.

I realized I could have more money than I ever used to believe of myself, because I am educated about money now.

I am capable of spending and saving wisely.

My past does not dictate my future unless I allow it to.

I really couldn’t have stopped the silent war that I was in with money for my whole life – overspending and under earning – without this Wild Money class and without this exercise.

I’m not saying I have all the answers now, but I do have a lot of insight into myself and my spending habits and I have some new skills to help me along the path now.

Luna’s mission is to help all of us creative types to get right with our relationship with money. It’s a money management revolution! 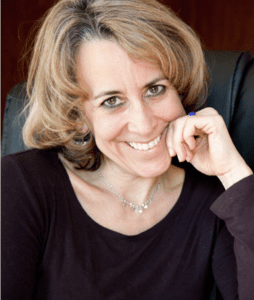 Luna Jaffe never bought the common notion that one must sacrifice passion or forfeit creativity to get serious about money. As a Certified Financial Planner and psychotherapist, Luna strongly believes that true wealth embraces your values, not just the numbers on your ledger. Entrepreneurial from a young age, Luna was the president of her own wearable art company, LunaSilks, at 23. She owns Lunaria Financial in Portland, Oregon, and is the award-winning author of Wild Money: A Creative Journey to Financial Wisdom. She is also the CEO and co-owner of Sacred Money Studios, a retail location dedicated to financial education, community and empowerment. Luna offers security and advisory services through KMS Financial Services, Inc.

The Power of Mindset in Living Your Best Life

Weight Loss Is Not about WHAT You Eat, It’s About HOW You Eat: Discover 4 Truths about Your Weight

Three Myths that Block Your Momentum

Gratitude is the Secret to Happiness

This website uses cookies to improve your experience while you navigate through the website. Out of these, the cookies that are categorized as necessary are stored on your browser as they are essential for the working of basic functionalities of the website. We also use third-party cookies that help us analyze and understand how you use this website. These cookies will be stored in your browser only with your consent. You also have the option to opt-out of these cookies. But opting out of some of these cookies may affect your browsing experience.
Necessary Always Enabled

Any cookies that may not be particularly necessary for the website to function and is used specifically to collect user personal data via analytics, ads, other embedded contents are termed as non-necessary cookies. It is mandatory to procure user consent prior to running these cookies on your website.